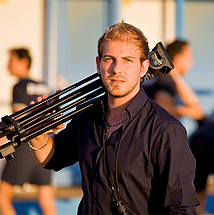 Andrea Cossi was born on the 13th of July, 1986. He graduated with a Bachelor of Arts in Cinema Studies in Pisa and he graduated in Filmmaking at the New York Film Academy in New York. He participated to numerous projects in New York and in Italy, writing books, directing and producing films, composing music and dedicating to professional photography. His and his twin brother thesis movie “The Pitch – Reloaded” was awarded with a Honorable Mention at the Montecatini International Film Festival.